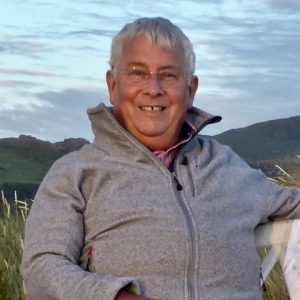 It’s been nearly two years since you last heard one of my TOC bulletins from early 2016, when I’d just survived a nasty bout of pneumonia, from which I was lucky to recover! That turned out to be a random infection I picked-up because my immune system was weakened from earlier cancer and subsequent chemo, and not directly attributable to my cancer (Mantle Cell Lymphoma – MCL).

I didn’t think you’d want me waffling-on without much of a story to tell, so radio-silence has been maintained, and Jane and I been happily getting on with our pretty active and enjoyable lives ever since, subject obviously to regular monitoring of the MCL. In December 2017 I hit my 70th and I’m now I’m only days away from my 71st – two events I was never to expecting to see when diagnosed back in 2010.

For the last four years the therapy I’ve been receiving has been, in lay-man’s terms, a super-drug called Ibrutinib which I’ve simply taken as two pills every day. There have been virtually no side-effects and this has been superb, almost the perfect solution. However, Ibrutinib was not a cure as MCL is incurable and terminal, and although I was originally advised to expect up to two years remission from the drug, I have remarkably had almost exactly four years, and become a bit of a case study for this effectiveness of this therapy.

Well, of course all good things come to an end and Ibrutinib has finally declined in effectiveness over recent months to the point where my consultants have decided to withdraw the prescription and plan the next stages in my treatment, which will be newer versions of conventional intravenous (IV) chemotherapy, albeit highly developed and now well-tolerated, with far fewer side-effects from when I was originally diagnosed in 2010.

How do I feel?

Well obviously disappointed that remission has ended yet again for a third time, but consistently stunned by the tenacity of the Lymphoma team at the Christie Hospital in constantly engaging with my disease so caringly and effectively. As our US cousins tend to say…. “They seem to exude the confidence that nothing’s going to get past them – they are quite brilliant!

The initial purpose of writing to you in this way was to keep our wider family and many friends, informed, and to reduce the flow of lovely, concerned, but ultimately taxing enquiries to my wife Jane, who’se had enough to put up with being married to me for 46 years, and now having the poorly version being endlessly enquired after. So I cobbled together an irregular email bulletin which I could send out from wherever I happened to be – home, hospital, chemo suite, toilet, etc.

From the couple of dozen original recipients who apparently found my updates interesting, I received a steady flow of requests from other friends, villagers, acquaintances, parishioners, drinking buddies, ne’er-do-wells, hobbledehoys and lovely people of whom I’d never heard, to be included on my mailing list. After a few months the mailing list exceeded 100 and I was getting dozens of messages of support, encouragement, love, humour and abuse in reply. This writing was a great way for me to fill long tedious days of hospitalisation, treatment and recovery. The emails culminated in early 2016 when, after many ‘alarums and excursions’ I was in what they call high quality remission. But with the knowledge that the cancer would, at some point, return. which unfortunately, it now has.

So we’re back to square one, nearly nine years later, with a cancer which has a 10 year survival prognosis of less than 5%. My temperature is spiking, I’m get drenching sweats every night and I’m very, very tired and short on energy; what they call profound tiredness. But worst of all very breathless, which limits my range quite a bit. All this has kicked in within 72 hours of stopping the Ibrutinib 2½ weeks ago. That’s the bad news!

The good news is I’m starting chemotherapy on Tuesday, and if previous experience can be relied on, I’m hoping to quickly recover from that list of nasty symptoms mentioned above and get back to normal, albeit after a bit of the usual chemo side-effects like, the tiredness, nausea, possible hair loss and a compromised sense of humour. The lovely people at the Christie have boosted me in the interim with large doses of steroids, which has given me the appetites of a 25-year-old Lithuanian Roof Tiler, and I can eat and enjoy huge meals of red meat and copious plates of carbs – Yum! The down-side of steroids are insomnia, mood swings tending toward aggression and argument and certain bowel issues which need not detain us here?

At this point I’ll sign off, secure in the knowledge that you’ll be wishing me well and those of a a more spiritual inclination might murmur a heartfelt prayer or two too. I’ll keep you informed of progress and of course the more amusing angles involved in the treatment of cancer; of which there are many!

Those of you who are reading this ‘ont inter-web at topicofcancer.net can thank my son, Andrew who has created this website as a special 71st birthday gift to me. I’m just getting my small (and shrinking) brain around the technicalities of how this all works. But I think he’s done a wonderful job so that me little tale is presented and produced very professionally and clearly. Thank you Andrew!